The store will not work correctly in the case when cookies are disabled.

It is with great sadness and out of an abundance of caution for our contestants, judges and event participants as well as the general public, that we announce that the Pendery’s Charity Chili Cookoff is canceled at the request of the City of Dallas due to health concerns about COVID-19.

This week Dallas County issued a Declaration of Local Disaster for Public Health Emergency in response to the global pandemic declared by the World Health Organization.

Our designated Charities, We fear, will need help more than ever, and we encourage those who were going to donate to still do so. 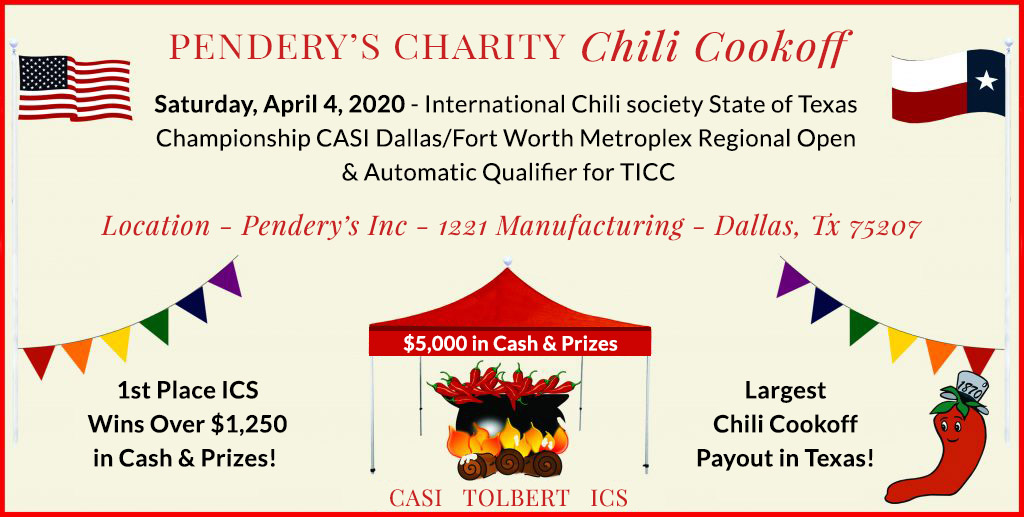 Pendery's, the Oldest Family Owned & Operated Business in Texas & the Inventors of Chile Blend is pleased to announce the beneficiaries of our Annual Charity Chili Cookoff which will take place on Saturday, April 4th: Cattle Baron's Ball & The American Cancer Society, The Park Cities 4 th of July Parade hosted by the Park Cities Rotary Club to benefit the North Texas Food Bank, Equest, The Assist the Officer Foundation, Special Olympics Texas and the CASI Scholarship Fund.

This year's event will be at Pendery's located at 1221 Manufacturing St, Dallas, TX 75207.  The judging will be hosted by Peticola's Brewery.

Charity, Chili and Fun for the Whole Family

Charity
In our first six years we have raised almost $850,000 for local charities.

Over $5,000 in Cash & Prizes – The largest payout of any Chili Cookoff in the State of Texas.  First Place ICS wins over $1,250 in cash and prizes!
State of Texas Championship: Top level ICS winners will be eligible to compete for a total prize package of $55,000 at the ICS World's Championship Chili Cookoff held each year in October.  Red Chili winners from both of our events will also be eligible to compete at the World Food Championships, which will be held in Dallas for the first time this year! The World Food Championships is the largest competition in Food Sport, where grand champions of previous events convene for a chance at winning the ultimate food crown and a share of hundreds of thousands of dollars in prize money.

Contestants can compete and acquire points in all three major Chili Competition Sanctioning Bodies:
ICS - This is the State of Texas Cookoff. ICS sanctions over 200 cookoffs a year and have helped raise over $86 million dollars for charity.  Winners in the ICS State of Texas event & the Texas Regional can advance to the World's Championship Chili Cookoff.
CASI - Saturday's event is a CASI Regional Open and an automatic qualifier for TICC.
OTICCC - Saturday's event is an automatic Tolbert Qualifier.  In addition to the local money raised by sanctioned cookoffs, Tolbert's Official charity is ALS or Lou Gehrig's Disease.

Red Chili Winners are also automatically qualified to compete at the World Food Championships:
WFC - Boasts the largest Food Sport tournament in history with well over 1500 contestants on 449 official teams. They came from 42 American states and 13 countries to compete, while more than 30,000 foodies watch and enjoy the heat of the battle unfold in 10 official categories. Since its debut in 2012, WFC has given birth to 30 TV food stars and awarded more than $1.5 million in prize money.

It is our Goal to raise over $50,000 for charitable causes, including the following:

- Pendery's World of Chilis and Spices -

There are no sliders matching the selection.